DJ Brian Wilson gives a detailed account of one of their performances.... 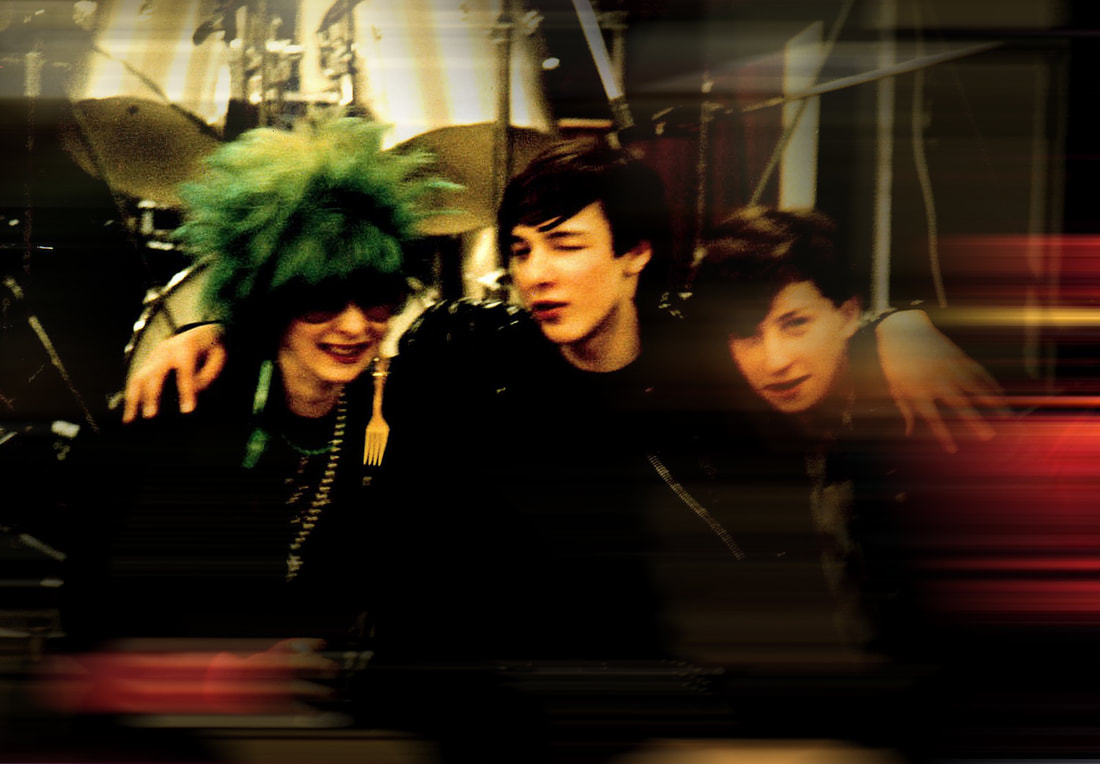 This is a very loose bit of basic background info about how the Tech gigs in Marketgait got started...

For many decades, the Art School & Tech were managed as one body called The Dundee Institute Of Art & Technology.
Although the 2 were in separate buildings (art in Perth Road, Tech in Bell Street), the Tech College had acquired an annex in the Marketgait by 1974.
In 1975, The Dundee Institute Of Art & Technology split into 2  -  Duncan of Jordanstone College Of Art and Dundee College of Technology, and were now managed separately.
By 1976 the Marketgait annex have their own Students Union area for entertainment.
Prior to 1976, Tech College gigs were put on at The Palais in South Tay Street.

Running parallel to this mid 70's college activity - The Palais sold their premises to Murdie Wallace who owned the JM Ballroom.
The JM closed down in 1974 to build a new nightclub (The Barracuda) and Wallace continued to run the Palais under that name until the Barracuda was ready in 1975.
The Palais then closed down and reopened again in 1976 as Samanthas.

This transformation is also reflected in the 70's music press - the college gigs go up to the end of 1975, disappear for a few months, then reappear again around September 1976.
The resident Deepwater Disco started up in November 1976 as well.

​This advert appeared in a Bruce's Record Shop newsletter called Cripes in August 1979.
It's a call for local acts to participate in a contest to see who could win a battle of bands.
The venue was the Bowling Alley and it went under the heading "Marketgait Marvels".
Around 10 bands took part.
One of the bands consisted of a bunch of schoolkids (the band name I can't recall) and when they finished their set, which went down very well with the audience, one of the organisers jumped up on stage and said, cheekily "Thanks to their parents for letting them stay up late", much to the amusement of the crowd.

You didn't have to be a student to spend the night at the Bowling Alley.
Each student was able to sign-in 2 guests, which meant the place was usually packed at weekends.

"Personally, I would say the heyday was 1976-79, as, up to that time, any kind of student from any college/Uni got in with their two guests. I know for a fact that many day-release hairdressers were regulars at the BA, along with plumbers, sparkies, and other apprentices from Kingsway Tech.
Unfortunately, during a Christmas break in the late 70s, an elitist decision was made by the Union Management Committee that only their own students and NUS-affiliated students would be allowed in, which meant, in Dundee, only Bell Street and the Art College, Dundee Uni, College of Commerce and Kingsway Tech being non-NUS.
On restarting after the break with the new rule, from regular Friday night crowds of 400-600 (depending on the status of the headline band), over four weeks, the attendance dropped to below 30.
The daft thing was that Saturday nights were still free and unregulated so there were more turning up on the disco-only Saturdays than on the Fridays. Disco was on 8-11 on a Saturday, after which, we all toddled off down to the Ferry Bar, latterly Junction 9 for the rest of the night. Wee Andy Pearson was the DJ down there at that time."
oooooooooooooooooooooooooooooooooooooooooooooooooooooooooooooooooooooooooooooooooooooooooooooooo 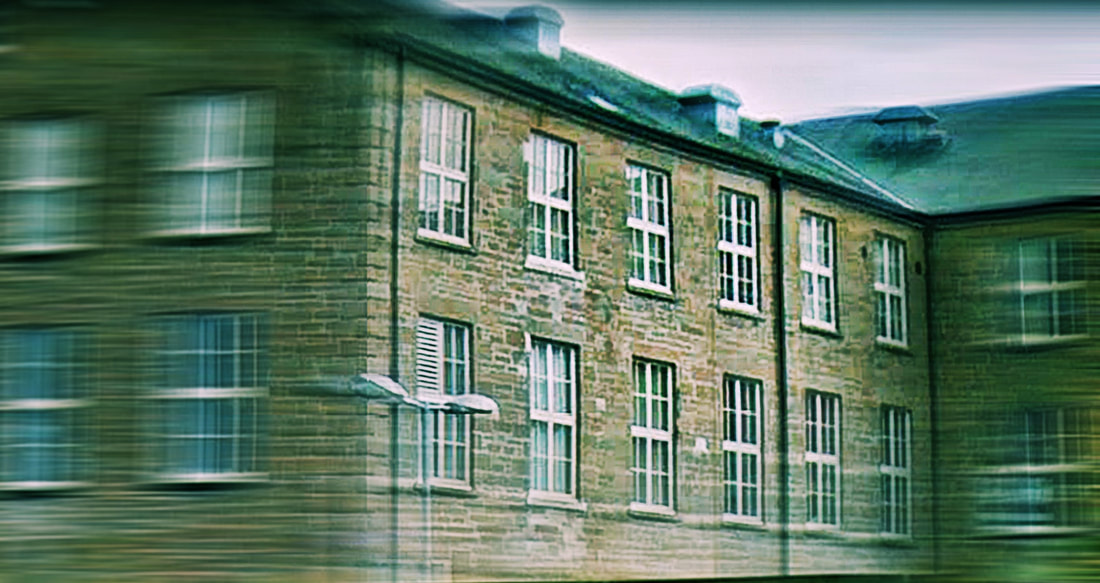 The Humpin' Squad were local college guys who helped the roadies get the bands' equipment into the Bowlin' Alley on gig night.

"The Students' Union actually employed a "Humpin' Squad", led by Robin Patterson. I think there were around six of them, including Derek Robb and 'Joe 90'. Their job was to help the bands' roadies to get the gear upstairs, by lift or stairs.

Druid - I can't recall whether the lift was out of action or their "coffin" was too big for the lift or the main staircase.
Their "coffin" was a large flight-case that must have been at least a couple of feet deep and wide, by around seven feet in length. The reason it sticks in my memory is because the Humpin' Squad and the roadies had to manhandle it up the fire exit staircase, from the area at the back of the union and through the window into the 'downstairs' hall...
(see above photo)
The six windows on the top floor... There is no obvious fire exit visible but it would have been between the 2nd and 3rd windows from the left. Windows 5 and 6 were actually in a corridor that went from the downstairs hall up to the foyer.
The "dressing room" was accessed from this corridor.

Dire Straits - they were so impressed with the squad that they offered Robin (Ross Paterson's wee brother) a job with them as roadie on their upcoming US tour. Robin declined, as he wanted to finish his college course but, to this day, wonders "what if..." 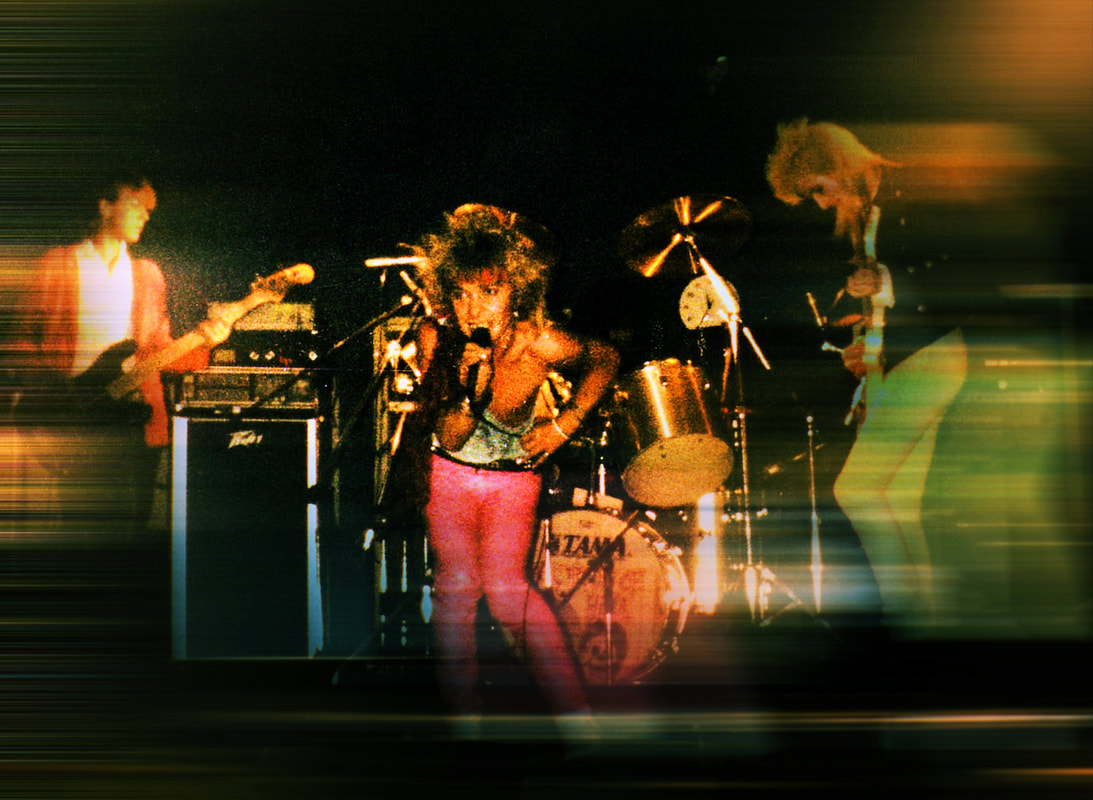 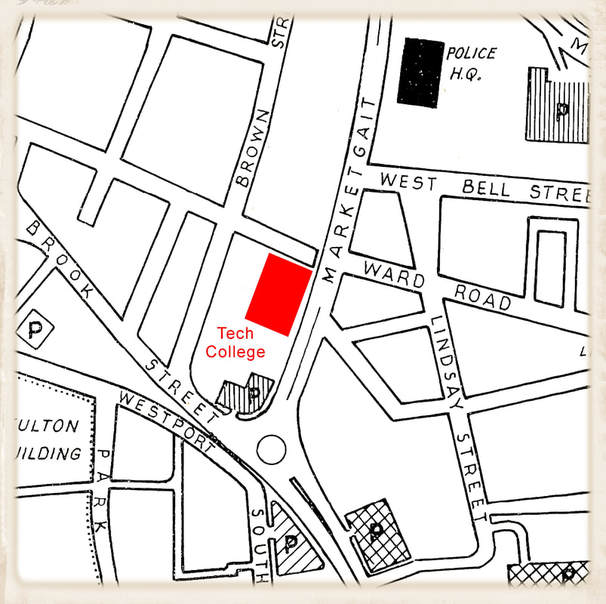 Tech Ents, as the name suggests, was the organisation who was responsible for providing all the entertainment at the Tech College Students Union - booking the bands and so on.

"Norrie McGrath was Vice President of Entertainments for the year - April '77 to the end of the 1978 academic session - taking over from Jim Thompson (guitarist and vocalist with Exhibition and The Visitors) who had been VP Ents until March '77.
Norrie was the guy who had a clear-out of old paperwork from the office when he took over in April '77 and said I could have anything I wanted before it was consigned to the bin. Which is why, among my cherished possessions (to provide for my retirement) is the receipt for the Sex Pistols gig in October '76 (£250), the contract, signed by Malcolm MacLaren, for the aborted Caird Hall gig, which would have featured The Sex Pistols, The Clash, The Damned and Johnny Thunder and The Heartbreakers, for the amount of £500.
Included are the letters from the council about the gig but I didn't get the final one. However, Iain Flett at the council's archive department was able to send me a scan of the final letter, which basically said that the decision was deferred until January so the Union could present supporting evidence.
Obviously, the deferment killed off the concert!

Also grabbed a copy of "Circuit", which was the magazine for entertainments promoters at the time.

I have a "Jags" poster from, I think, 1978 or 9; one of the few posters that mentions Deepwater Disco.
We went round the town with Martin Webster in my car, sticking them up wherever.
I remember one of them was on the telephone junction box outside the museum, at the top of Commercial Street.
​Must have a look for that poster..."

Further to your story about Chas & Dave in Friday's Courier.

To flesh out Chas's comments - In 1979, I was resident DJ at the "Bell Street Tech" Students' Union in Marketgait, always referred to as "The Bowlin' Alley", due to its previous incarnation in the late 60's as the Skyline Bowl.

Every year in December, on the last Friday of term, the Union organised an "all-nighter", known as the Snoball. The entertainment consisted of six bands, two discos and a couple of female "novelty acts", spread over two rooms, and ran from eight in the evening until six in the morning.

On the Wednesday leading up to the 1979 Snoball, Martin Webster, the VP Entertainments at the time, received the shock news that Friday's headline band had pulled out of the gig. He immediately started phoning round the agents, and eventually found out that Lindisfarne were playing at the Caird Hall on the Thursday night and had a free night on the Friday, before playing Glasgow or Aberdeen on the Saturday. Martin asked about the possibility of Lindisfarne agreeing to playing at the Snoball and the agent said he would get back to him.

Within a couple of hours, the agent reported back that Lindisfarne were looking forward to their night off but the support band, Chas & Dave, could be agreeable to a suitable offer. It was arranged that Martin, Pete, my disco partner, and I would meet up with Chas & Dave after their set on Thursday evening. I should say that Chas & Dave had previously played at the "Bowlin' Alley" and had gone down a storm. I seem to remember that they played a total of four well received gigs at the venue in the late 70's and early 80's.

We duly arrived stage left during their last number and when they finished their set, suggested that it would be fine to go somewhere that served beer to discuss things, so we took them round to The George in Castle Street and, over pints, in a traditional Dundee pub, a deal was thrashed out, involving what is known in Dundee as a "back-hander" and a case of, if my memory serves me well, Newcastle Brown Ale!

As Chas implies in the Courier story, the Bell Street students appreciated the lack of "airs and graces" and general "let's have a knees-up" attitude that Chas & Dave displayed as, at that time, the majority of Bell Street students were Dundee born and bred. As the story pointed out, Scottish audiences got where they were at, rather more than audiences down south.

​...and this is a full page tour advert for when they visited a few months earlier in Oct '79... 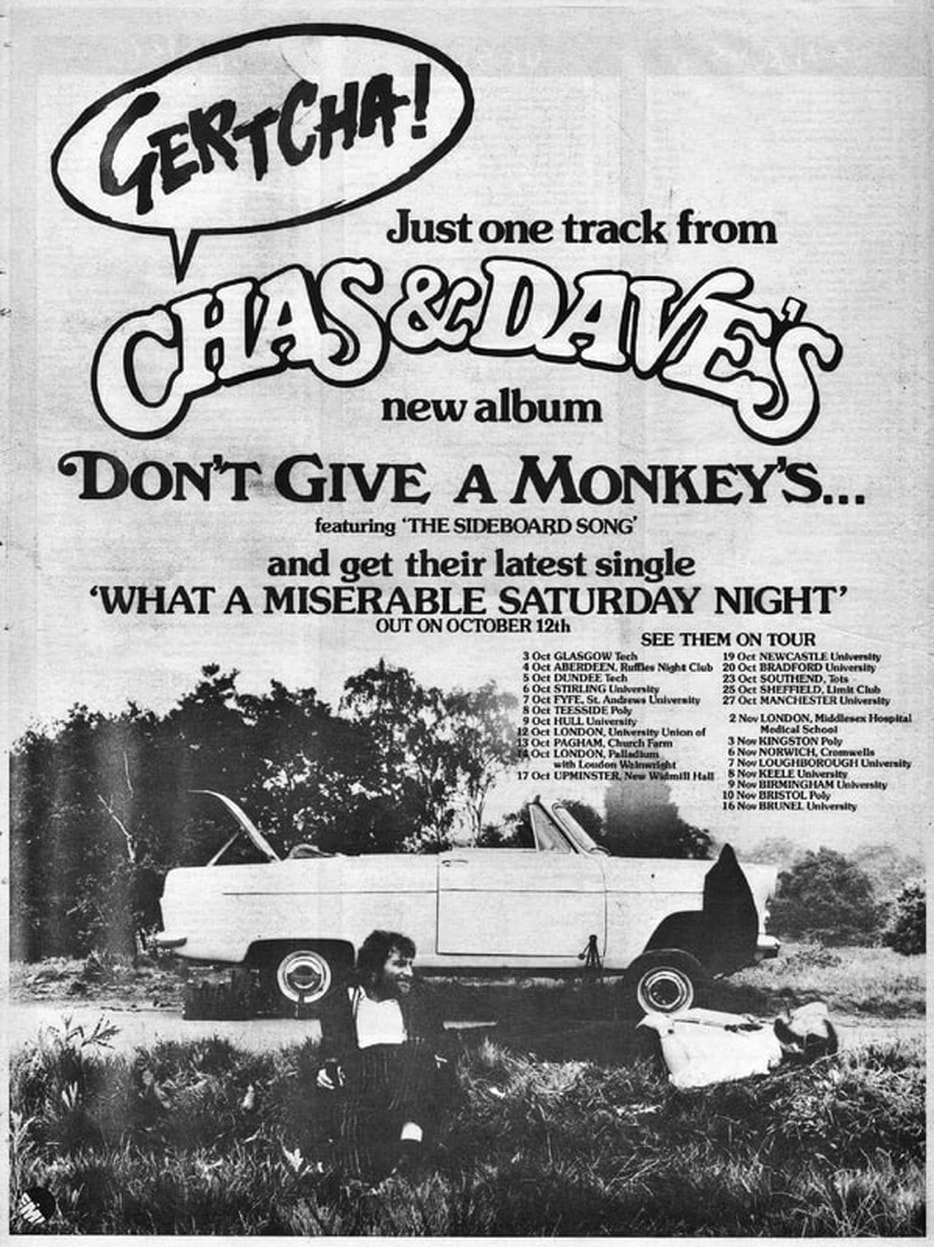 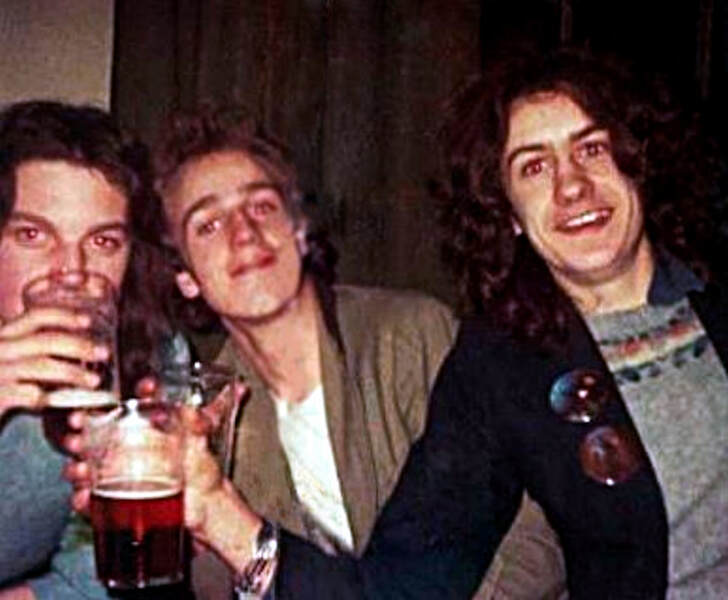